Twinsen here. As you might have read in Friday Facts #166, we wanted to do some combat balancing. First, to not bring the hopes of everyone up too much, this did not mean a combat overhaul. It means mostly tweaking numbers to make the game more fun and make some of the the weapons more viable. No new entities or new mechanics.

As I was doing the combat balance, it was clear the everyone has their own different opinion of how combat is, how it should be and how to make it "better". It's hard to please everyone, especially when you are just tweaking numbers. To try to objectively evaluate combat I used the following methodology. As the game progresses, the player's power increases through research, but so do the biters(mainly due to evolution factor). So I split the game in 7 sections based on research progress. Each section also has the evolution factor I tested biters will approximately have in an average game.

Then for each section I tested both offensive combat and defensive combat using the available guns and turrets and tweaked the numbers accordingly. While tweaking the numbers, I keep this in mind (this is not a complete list):

So far, the changelog looks like this. There are many numbers that were tweaked and are not included in this list.

As usual, these changes are not final and will probably change to some degree as we playtest more.
There are still many things to be done. We are always talking about more end-game weapons, so don't worry, the combat in the late-game will be even more worry-free.

There is also one thing that we always talked about trying to remove: turret-creep (destroying biters base building turrets closer and closer). This method is very powerful and usually doesn't cost anything. So far I believe that we did not find a simple, fun and fair solution. Ideas include: large power-up times(annoying and also weakens base defense); simply not allowing turrets to be build near biter bases (makes the player feel cheated); underground anti-turret worms (sugar-coated version of the previous idea). With the combat changes that were done I believe there is almost always an option to destroy bases without being forced to use turret-creep.In the end maybe your ingenuity and effort of building all those electric poles should be rewarded; If the player wants to do it that way, why not let him? Let us know what you think.

With Twinsen diving into the deep end in combat, I (Klonan) started work on a new scenario. A staple of the RTS genre is some sort of a tower defense mode, where mobs spawn and move towards a key building the players must defend, so of course we had to give it a shot in Factorio and see if it works. The traditional definition of a tower defense has the mobs follow a maze like path, and they do not attack the players towers. It works really well in these games due to the mob and tower varieties, interesting upgrade systems and styles, but without these systems here, the gameplay would not be too compelling.

So I opted for a more free form Factorio oriented style, that I'm calling the 'Wave defense'. The players will spawn in one corner of a square map, with biters spawning in the opposite. After some time, the biters will begin spawning for a period, and head towards the silo. After this wave, there is a short skippable intermission before the next more powerful wave starts.

At start of each wave, the rocket silo ticks up if progress by 5%, and on wave 20 you will have to launch a satellite to win. Each unit you kill along the way will reward your team with a bounty, which you can use to purchase any number of upgrades, such as turret damage, shooting speed and more.

The testing of the scenario fits in quite nicely with Twinsen's recent combat changes, it will take many hours of playtesting to find a nice balance to how difficult the scenario, especially in multiplayer. Still I am interested if any of you (the community members) had any different ideas about a 'Tower defense esque' level for the game. 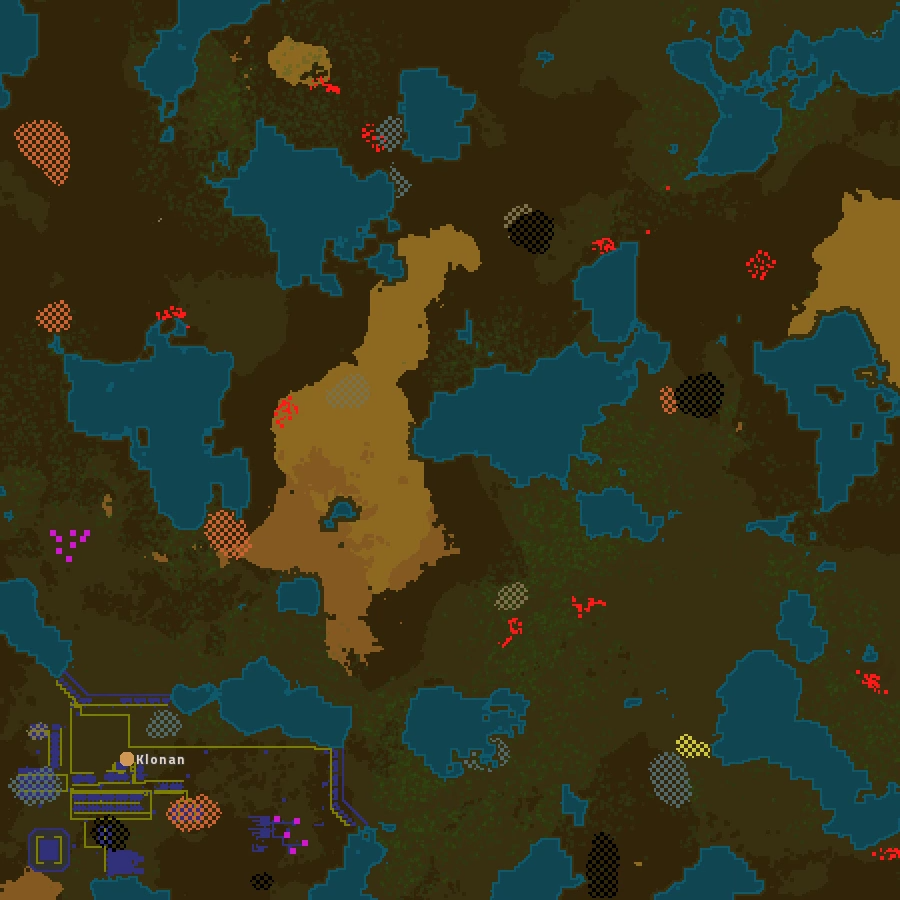