So today I'll be talking about an exciting new entity coming in 0.15: the Programmable Speaker. It was designed to do two main things: 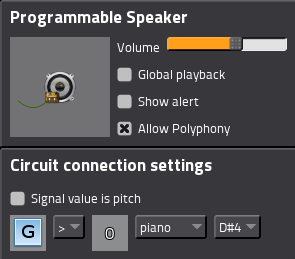 Let's start with the useful part, it's pretty straightforward. You set your circuit condition, set the sound you want it to make, set whether the sound should be heard in that part of the factory or across the entire map and add an optional GUI alert message. When the circuit condition is true, the speaker will play the selected sound and show the optional GUI alert. You can let the sound play continuously or use simple combinator logic to make the sound at custom intervals.

And now that fun part. We knew we wanted the Programmable Speaker to be able to make simple songs. Crazy ideas started to pour in, and it was quickly becoming a full-blown music production DAW with custom synthesizers and control over everything. But this has to be easily controlled by the circuit network without having to build real-time computers with combinators. So in the end I made the Programmable Speaker work as a step sequencer. If you send a circuit network signal pulse, an audio sample will start playing, otherwise nothing will happen. There is no control over the sample length or any special effects, but this means it is quite easy to control it using the circuit network.

Enough talk. Here is a demo of a song made using the samples already included. Everything you hear is created inside Factorio. I will leave it to you to analyze the video and figure out how the song is generated.

Modders can easily add more audio samples to the entity, including custom alerts. I imagine there will be a voice pack mod that could be programmed using combinators to speak things like "Crude oil is low".
I'm sure the Programmable Speaker will be part of some very interesting posts on the Factorio Reddit.

There are some other circuit network improvements coming to 0.15, but I will talk more about them in some other FFF.

For as long as I can remember, our multiplayer map downloader had (among other problems) the problem that it would get stuck at 100%. It was an extremely rare problem some random person would report. We would keep ignoring the bug throwing it in "Pending" or "Duplicates" or "1/0 Magic", but after a few months some other person would report it again. I seem to have a habit of obsessing over these rare "unfixable" bugs (audio mixer crashing, vsync performance issues, non-pixel-perfect sprite drawing), so I started looking into this map downloader issue.

First I was looking at the map downloader code itself, thinking surely there is something wrong there. This was a long process because I had no way of reproducing the issue, so it usually involved going back and forth with a person who was experiencing the issue. I would create an executable that would create detailed logs, that person would run the game using that, I would investigate the logs and see that our map downloader works correctly. The I would add more logging and so on. By the time I would reach some kind of conclusion that person would stop answering and probably stop playing Factorio.

But near the end thanks to some helpful players, I was able to see what was happening. Looking at the wireshark capture for both the client and the server, it seems that a packet with a specific content or a specific checksum always gets filtered. Some cheeky firewall from the computer, router or ISP is looking inside the packet data and blocking the packets it does not like. No matter how many times I resend that packet, it never gets through, while all the other hundreds of thousands of game and map packets have no problem getting through. Correct me if I'm wrong, but something like this should not be happening. You can read all the details and see the packet data last posts of the forum topic.

The issue seems to be resolved if I add one byte of random data to the packet, but I would like to know why is this happening in the first place. If you know what is happening or you know someone that might, please don't hesitate to enlighten us :)
This shows how hard it is to make software that "just works" for everyone. There will always be that 0.1% of people who end up having problems that no one could have ever foreseen. Big thanks to admalledd, dadymax, Rippie and the other forum members who helped or are still helping me investigate this odd issue.

In other good news, while Rseding91 was also looking at the map download code trying to investigate this problem, he found we had some slow code doing hard drive seeking, slowing down map uploads. He improved it and you should see better map transfer speeds on LAN and high speed connections.

As usual, let us know what you think at the forums.