Friday Facts #181 - Calm before the storm

Work this week has been progressing nicely on 0.15. We hope we will be able to start our internal play testing soon, as the team works to close off the rest of the major features. Rseding will be arriving here in Prague next week for another of his infamous visits, and Harkonnen will be joining us shortly after, so the office will be prepared for tackling any issues that may arise.

Since we are going to be spending the next period polishing and fixing what we already have, you can look forward to some less interesting FFF posts in the coming days. Take the lack of exiting new topics to cover as a good omen that the whole team's effort is on getting everything ready for the release.

Video and content creators are a really integral part of our success as a developer, without the exposure and feedback we receive from reviews, critique and lets plays of the game, Factorio would not be what it is today. While this probably won't be the last time, I wanted to express our deepest gratitude to everybody who has helped to spread the word about our project, and to every one of our community members and contributors.

For a long time we have offered press keys on our website. For channels that meet our requirements, we give a free review key in exchange for their thoughts and coverage. This next section might not be as interesting to Factorio players, but I would like to take this opportunity to share some word of warning for any other developers or small publishers with any similar system.

There are some people who will try to exploit this press key policy of ours. The simplest attempts are just straight imitation of a famous Youtube or Twitch personality, usually hoping we don't try to verify any of their information. A different approach some take is much more effective. They will have a successful channel already, and email us asking for keys to review the game and play some multiplayer. So since they have some community for their content, and it seems like a good deal for both of us, we'll give them a couple of steam keys. However they don't cover the game, and instead sell the keys. Several weeks later, they will send in another email, hoping we've forgotten about their previous requests.

These cases have raised some moral question in me about whether it is acceptable to deactivate a review key. If a channel writes in and asks to cover our game, and even 6 months later they haven't shown the game at all, do they deserve to keep their free copy?

I would also like to clarify our policy on Factorio content. We 100% support any and all content you make about Factorio, and fully support content creators rights to monitize this content. We don't require you to ask permission, or get a key from us directly, if you want to cover the game, we will never claim your videos or copyright strike your accounts. If you'd like some further reassurance, feel free to email us and we can provide a statement to put your mind at ease.

I (Vaclav) have been working on a little side-project whenever I could find an extra hour here and there. Since we made the pipes in high resolution, everything else has become visually incompatible with them (mainly in the connecting points). This motivated me to make more pipe-related entities in high resolution to get everything to match.

The process was "just render it in double resolution", paste the pipe graphics in the spots where necessary, and then hardcore Photoshop paint over them. I bought a new portable Wacom device, which allows me to do exactly this kind of work whenever I'm not at the workstation (on a bus, home on a sofa, etc.), which is very time efficient and I really enjoy doing it.

For now it's the refinery and chemical plant, maybe I will be able to complete the storage tank for 0.15 as well. Even if I won't, we will just update the graphics during the 0.15 experimental phase. 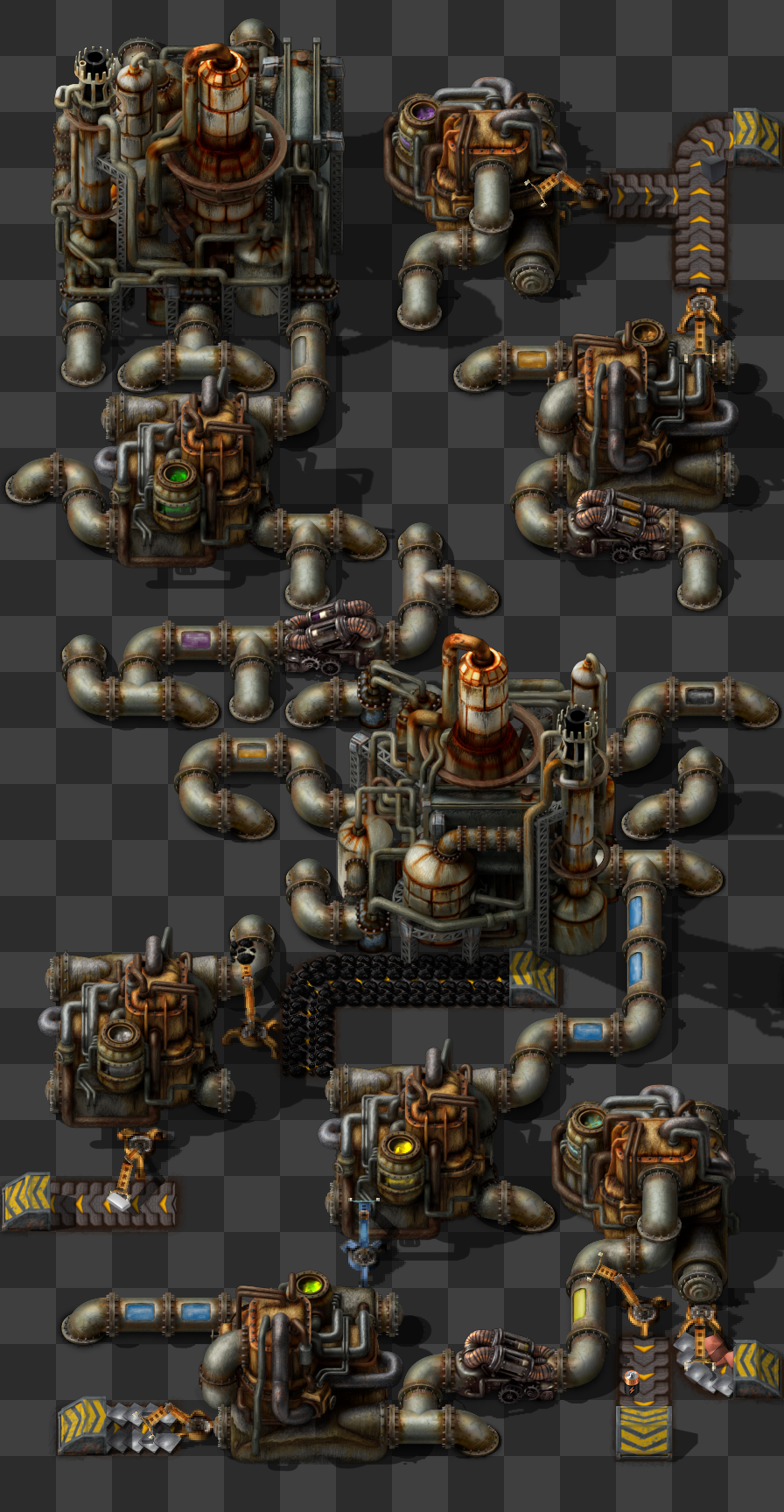 As a bonus, we added a tint to the working animation of chemical plants, so you can tell what recipes are being processed. Some of them are quite similar, so it isn't as easy to tell which is which, but it's certainly clearer than it was before.

As always, if you have any thoughts or feedback, let us know on our forum.