Hello,
We released 0.18.2 and 0.18.3 this week. In terms of major releases, this one has very few bugs, so we haven't had a lot of pressure to crank out the releases at lightning speed.

In the sound design department we have been hard at work to bring you a better gaming experience with the help of some new and improved sound effects. It struck me that the whole sound track used to have a lo-fi, almost 'dirty' feel, by which I mean the sounds were unclear, had a low resolution and possibly used recordings made with the wrong microphone positioning. So with Val's help we have set about improving some of these sounds. For example, there are new sounds for all the transport belts, they don't sound very different but they are smoother sounding and less annoying.

Similar to the transport belts, we also have sounds for the combat robots that are designed to harmonise with one another. Val made a bunch of synth tones for these and I chose the three sounds that make a pleasing harmony when you add them together.

However in my haste to get these sounds in the Tuesday release, I missed that the fast and the express belts had an annoying high pitched whine in there. So I have EQ'd off the high frequencies and now they work better.

The main reasons for having sound design in a game is not just to increase realism and immersion but also for player feedback and to increase the fun factor. Sometimes these things are hard to get right, especially in a game like this where there are so many sound producing entities so close to one another, often with very busy animations. You expect to hear a busy sound, but when you play them all together... it can be a mess. Add to this the innumerable ways sounds can be combined, well you get the idea.

I have described this game as a sound designer's dream... and also nightmare. So try and bear with us while we get the balance right. We are also trying to do all this without a modern sound engine, which brings me to my next point.

Tech wise, Rseding has been busy updating the sound code. For example we now have the listener position on the centre of the screen by default, which makes more sense to me and helps when you are in the map mode. Zoom level and attenuations have also been increased.

Innumerable other small fixes to sound levels have been made and hopefully the game is starting to sound the way we want.

In the 0.18.2 release this week we changed the map colors for a few entities from the default blue:

To us it is nice to have a bit more differentiation between entity types/families on the map view (without going crazy), and we think we are carefully getting there.

These changes should especially help tell give some character to power setups, and big assembling blocks with beacons. We're happy with the way it is looking, and with more time we might decide on some more tweaks.

Quite a lot of great things to share this week :).

Last Saturday, KatherineOfSky and Caledorn hosted a MP server with the goal to set a new record of over 500 players. The server was funded by the community through a GoFundMe. 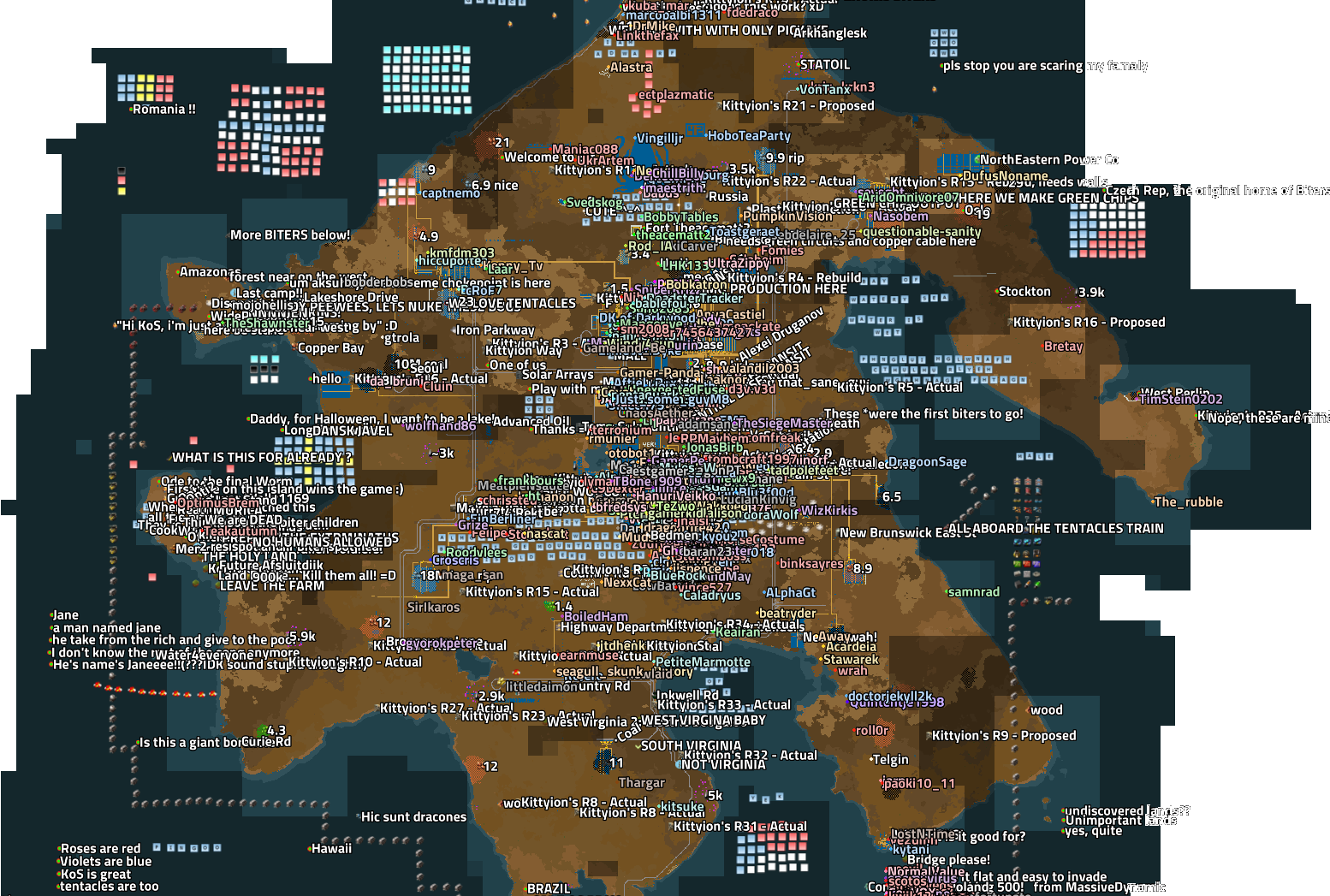 They were successful, and managed to have at one point 521 players online. This is actually quite a surprise to us, especially since it was with the fresh 0.18.1 version of the game.

You can watch the full stream of the MMO event here.

Nefrums set a new speedrun record this week playing 0.18. He is getting close to a sub 2-hour run, just 5 minutes to optimize!

The Biggest and most Useless Rail Network Ever...