Hello,
we spent one whole day by playtesting the 0.12 multiplayer. To my surprise, we didn't encounter any problems so we are just few small bugfixes far from the 0.12.23 which will be probably the version used on steam. I thought how experienced and good we are when we managed to make pretty big factory in just 8 hours, but once I saw the Factorio world record speedrun I don't think so any more :)

I wanted to know what are the limits of the speedrun to be able to guess the proper time for the speedrun achievement. I found that AntiElitz is the current holder of the record with the unbelievable time of 2:26:21. You can watch the youtube video of the deed. I watched it all and I learned a lot of new setups and techniques, I was really surprised by the level of the skill. Bravo.

I worked mainly on achievements this week and it is "surprisingly" a lot of work to plan and implement, the upside is, that from now on, I will remember the proper spelling of the word "achievement" forever :)
It is now possible to specify achievements as data the same way as other prototypes, which means they can be added and modified with mods. You can also list all the achievements ingame (Mainly important for the future non steam users) and get a notification when you unlock it. Let me show you example of the only hidden achievement in the game (You can guess how to get it). 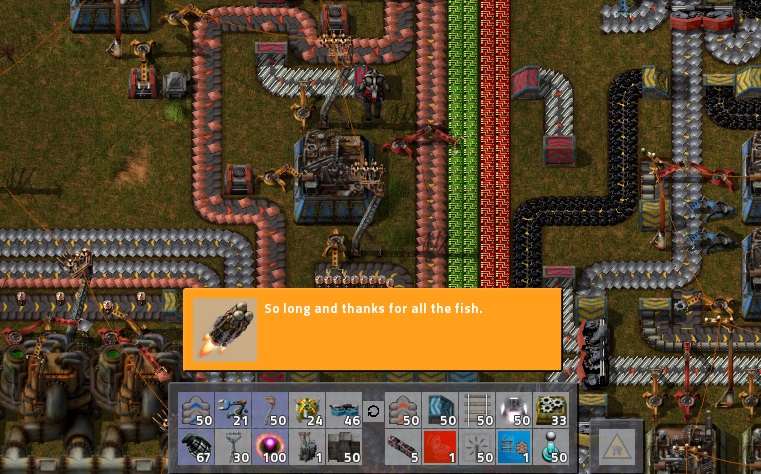 I have created 23 achievements so far. Many of these were inspired by your submissions in the reddit and forum threads, thanks for the ideas. The achievements fall to these categories: The question is whether there should be many more achievements or not, and what categories should be expanded the most. I don't want to add many more achievements that would require the player to play from start to finish, as it might be more annoying than challenging.
It is also a hard to decide the conditions required to gain an achievement. The only limitation we have now is no mods (modded achievements are possible, but they are separated) and no use of the console. There might be others, like limitation to freeplay, limitation of resource settings, peaceful mode and other. Do you think that we should limit it a lot, so some of them are bigger challenge, or leave it up to the players?

We started the work on technology tree 2 weeks ago. The original plan was to replace the boring list of technologies by the tree so the tree structure and dependencies are more understandable. The problem was, that whatever approach we tried to make the graph nice and understandable, we were never able to get something that wouldn't look like a huge mess of lines crossing each other everywhere. This lead us to a conclusion, that it is probably not possible to do it this way and we need to simplify the task. We sit down, and made a list of reasons we want the tree in the first place: So we decided to just make a small sub-tree of technologies related to the one currently selected. The results look promising, and we will present what it looks like in a future Friday facts.

We've got a lot of feedback after the update of the work in progress on the circuit connector in the recent friday facts post. The people were basically saying, that they don't like the idea that everything connectable to circuit network (even inserters) will need a special entity next to it. So we decided to reopen the subject, and after discussing it thoroughly we decided to change the plan. The new plan is, that almost every machine will be directly connectable to the circuit network the same way as before. This still means, that the smart inserter and smart chest will be removed, as everything will be connectable, even the regular chests, inserters or even belts. There will be some general graphics of tiny antenna attached to the object once it is connected to the wire, so it doesn't look too funny.

Michal had been given the task to work on the new turrets. We wanted to have some simple prototypes that can be tested before deciding about the configuration and graphcis specifications. The problem is, that the first turret we chose to do was the flamethrower one. To make the flamethrower turret, we first needed to upgrade the current flamethrower mechanics, so we had to make the mechanics of things catching on fire which finally leads to mechanics of forest fire. As you can see, the task can recursively derail quite quickly, but it is part of the job. Let me present you the current work in progress of the forest on fire.