Hello there. As you probably know, we released the experimental version of 0.16 this week. As usual after such a big release, we are working as best as we can to fix the bugs to make the game reasonably playable as soon as possible. Our current goal is to have semi-stable version before Christmas.

Buffer chests, that were introduced in fff-203 are now in the game, but they are now usable only for personal logistics and construction, but not for requester chests. We changed it before the release, as we noticed during the play-testing, that a lot of the the items are moved to buffer chests which could be on the other part of the factory, just to be immediately moved to requester chests, which could be all the way on the other side. It was basically broken and we did not foresee it.

We have some different things in mind to solve the problem. If it works out, we would like to enable buffer chests for requesters during the stabilisation of 0.16

Part of the testing revealed to us, that buffer chests are not fully replacing the possible feature of having dedicated storage chests. As this feature seems to be easy to do, we might do it as well. It always seems easy to do, until we actually make it :)

We are going to have some discussions in the office about how should the belt compressing work, and what techniques should work and what shouldn't. I would personally prefer, to make the only way to compress two uncompressed belts by using a splitter, as all the other tricks are kind of unintuitive usages of bugs in the previous belt internals. Others think differently, as they want to make inserters and side-loading to compress automatically. I think that it would actually remove part of the emergent-gameplay and something for the player to learn as he/she explores the mechanics of the game, but I have to agree, that the game would be more comfortable to play. You are free to say your opinions in the comments :)

These is only a single place we handle bug reports, the bug report forum. If you make a post somewhere else, or PM one of the developers, we might not see it, and these reports can get lost. So if you find an issue, crash, glitch etc. go to the forum first.

Okay hold up, don't just make a topic just yet, first search or browse around to see if someone has reported it already. If you don't see anything similar in the main bug report section, please use the forum search to see if a report was moved to one of the subforums (Assigned, pending, resolved etc.). As a bonus, this is like a sneak peek into the bug fixing process, and you will be able to directly talk with the team and help us make the game better.

Some things however, are not bugs. We don't want to be ungrateful, but reporting things you dislike as a bug doesn't help us. We are happy to receive this feedback in the Ideas & Suggestions forum.

Some things though, are bugs. But we can't fix everything instantly, they need some deeper work, or maybe they just aren't a priority. Game crashes, corruptions and similar issues are the most important things to fix. We are sorry we cannot get to the things that are bugging you right away, but with a little patience we will have everything sorted out before you know it. We don't ignore things in bug reports, but we do leave them alone sometimes. Don't worry if it seems we have overlooked your report, there are just other things to do right now.

So Monday afternoon we received 28 boxes of T-shirts. 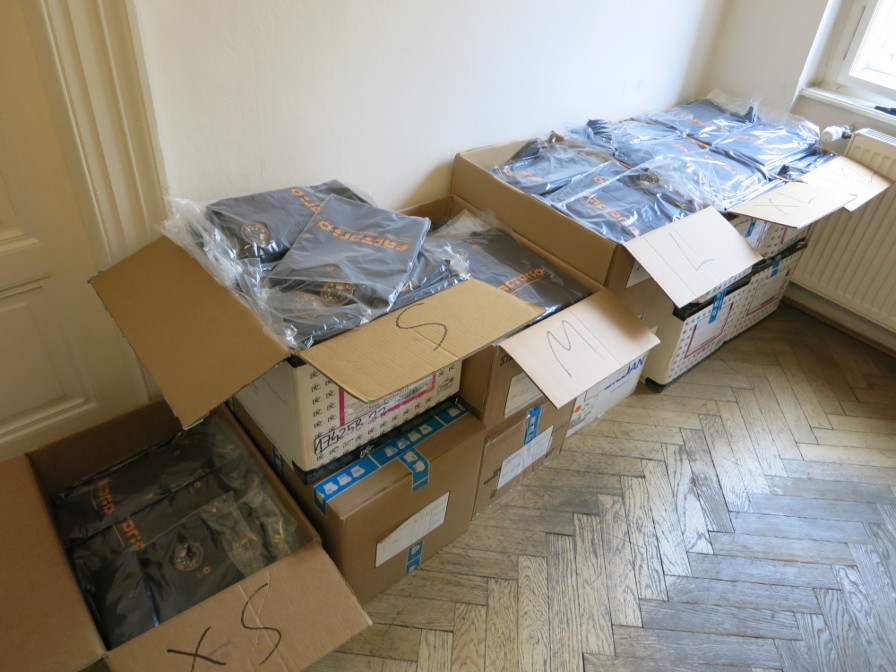 Soon after, we opened our store to orders. Frankly we were not expecting this many orders... but only 24 hours later, we had received over 700 orders. So then begins the process of packaging and shipping these. 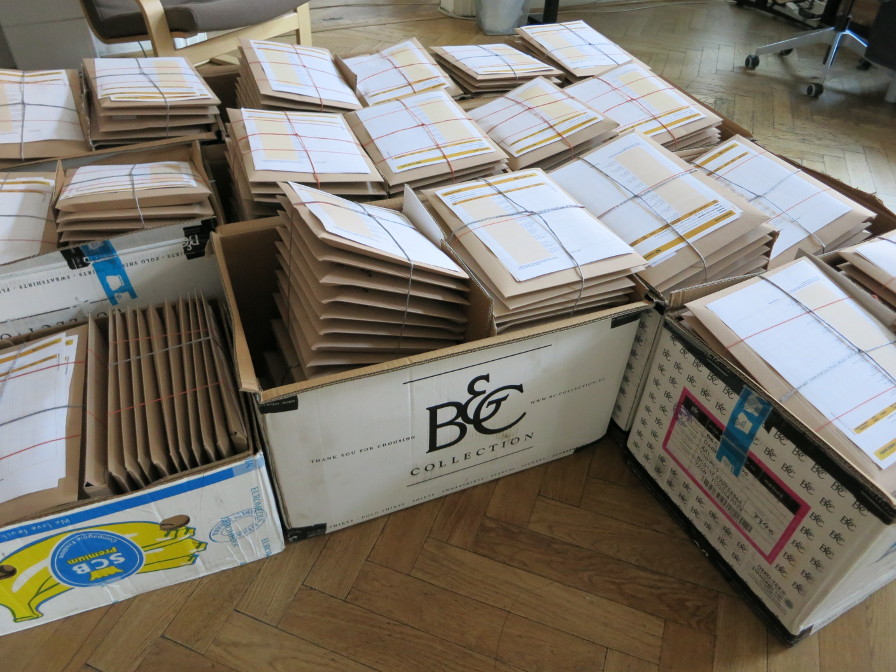 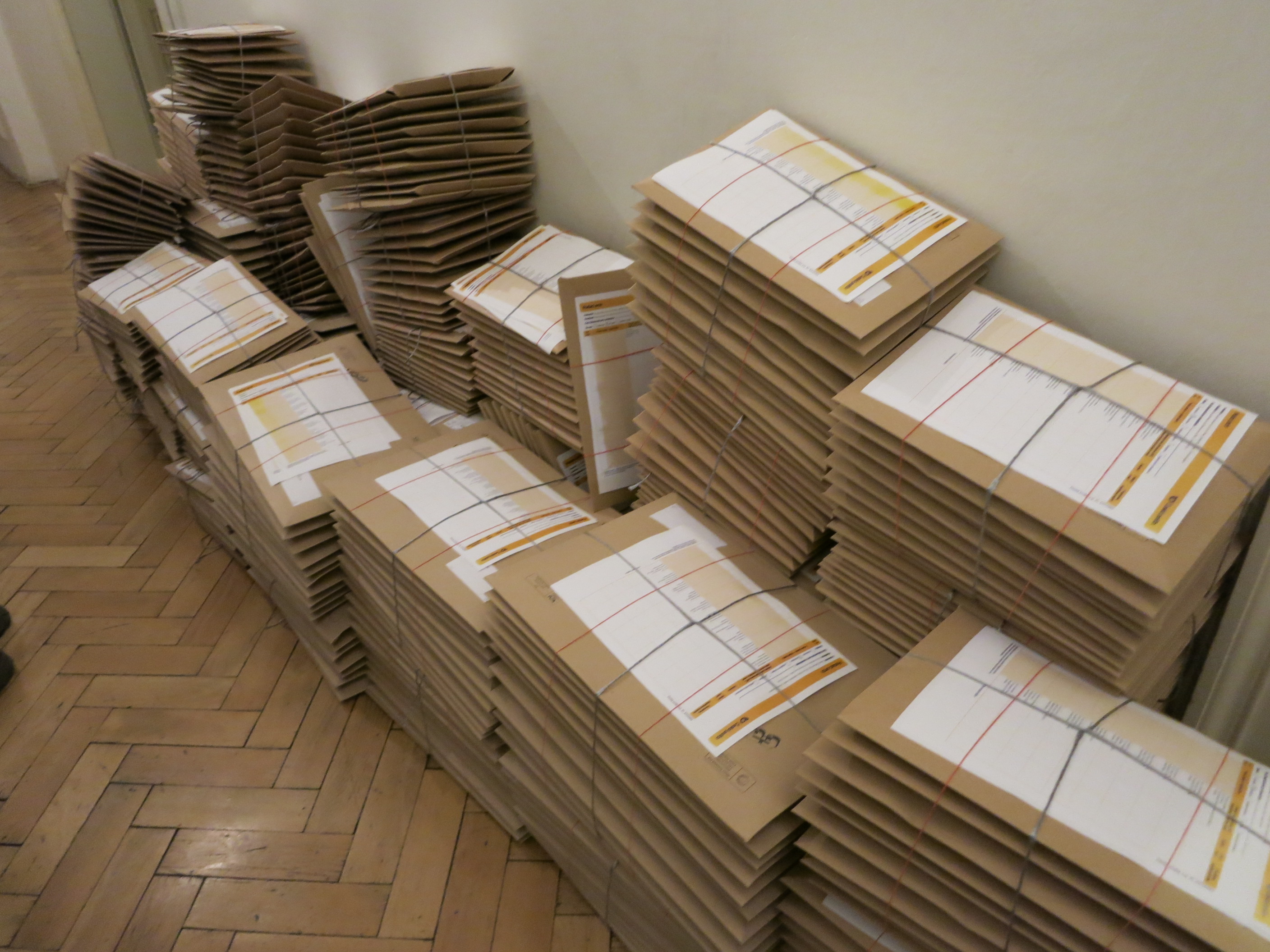 The first shipment of 786 packages was sent Wednesday morning, which included all the orders places before midnight on Tuesday. As of this morning, we only have 800 T-shirts left, we ordered a batch of 3,000 more, but they wont' arrive till the new year.

As you can expect, this week has been quite hectic for us, but nonetheless, we are looking forward to reading your thoughts and comments on our forum.