While working on the GUI, we reached the infamous blueprint library, and we started talking about how to improve it. This lead to discussions about how we can improve the entire system of blueprints. The problem was not simple at all, and these discussions have been going on for a few days.

The current version of the blueprint library has several problems:

Changes that will be done no matter what

Apart from this, there is the problem of how to resolve the rest of the blueprint library problems.

This would be implemented together with the quickbar is just an action bar idea explained in the fff-191. The idea is, that blueprints would never be items. Quite an extreme change, as it would mean, no blueprints on belts, no blueprints in chests etc. In this scenario, we could still allow a mod to create/allow blueprints as items, but it wouldn't be the vanilla way to do it.
If you create a blueprint, there would be 3 things you could do with that.

Proposal 2 - Blueprint items that are linked to the blueprint library

This looks nice and all, but it has its own collection of problems. It kinds of leads us to not liking this option too much as well.

There would 10 slot blueprint bar under the quickbar (or action bar). It would be the only possible storage for blueprints, so no blueprints as items and no separate blueprint library. It would have unlimited amount of pages that can be added/removed/selected. This blueprint bar would be shared between all games.

The advantage of this is simplicity and straightforwardness, that there is suddenly only one kind of blueprint (instead of 3 in Proposal 2). No need to transfer from inventory to library and back. The storage and place where it is used from is the same.

The disadvantage is mainly the fact, that it isn't integrated with the quickbar (or action bar), so you can't use the default 1-10 shortcuts to access it.

Again, this goes together with the quickbar is just an action bar idea explained in the FFF-191. Additionally the action bar will have multiple pages of shortcuts. You can select what page of shortcuts you want to use in which of the 2 displayed bars. Something like this: 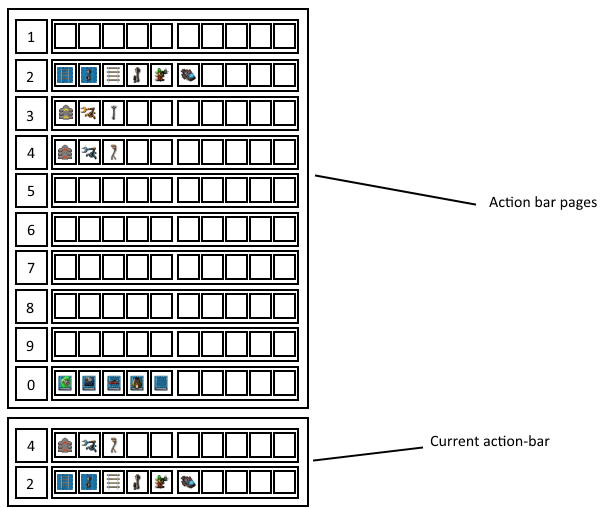 This is similar to proposal 3, but with blueprint-bar and action-bar merged. The action bar (with all the pages) would be shared between games. Blueprints could only be stored in the action bar.

I personally like this the most. Even the description of it is stupid simple. You just open different save, and you are guaranteed to have access to all the blueprints and action bar selections you created in the previous game(s). You can use keyboard shortcuts to access blueprints, you can combine pages of action bar of items and blueprints to your liking. For example, action bar with rail building would have rails, signal, locomotives, wagons, and different kind of rail building blueprints(or books).

The disadvantages of this solution are the limitations. If we keep the amount of action bar pages to 10 for easy access through keyboard shortcuts, it implies limited amount of space for the blueprints. I personally wouldn't see it as a problem as it is 10x10 slots should be enough for everyone right? :) But seriously if at least 30 should be free to be used by blueprints, and since we have blueprint books that have unlimited storage size, the amount of blueprints you could store would still be unlimited, only the amount of books (categories) would be limited.

How many people out there would have actually problems with the limitation of having around 30 blueprint books? Obviously the second solution is to allow more than 10 pages of quick bar, but it would come with different kind of problems.

The second problem that might be the fact, that you can't make a blueprint "just for this game" without putting it into the library. I personally don't see it as a problem, as the whole point of the blueprint library rework is to avoid the problems of merging two kind of storages of blueprints. This would force the player to have only one.

The third problem of this might be the fact, that the blueprints are not items anymore. Some people might prefer to store their blueprints in chests over the map in certain way. For example, putting oil setup blueprints in their oil setup map area etc. This wouldn't be possible anymore, as the blueprints would always have to be in the action bar somewhere.

As you see, it is quite a tough problem, and it is cases like this where your feedback is even more valuable than usual, so please let us know what you think on our forum.