Hello, Another week has elapsed, which brings us another week deeper into the declining weather of autumn.

In FFF-288 we proposed that we are considering multiple approaches to remnants, and in FFF-293, we described that we are choosing the balanced solution which does not obstruct the movement of a player if an entity is destroyed. We have recently finished quite a few which we would like to show you.

Compared to some of the early versions of remnants, you can now really recognize which entity got destroyed.

If you have been following the progress of remnants in 0.17 experimental versions, you have probably noticed that a lot of them have been changed quite drastically. In general we are trying to hit the balance between having the remnant look destroyed enough, yet still very well recognizable which entity it was.

This is especially difficult for tall entities as the player has to be able to walk over their remnant, the extreme case being train stop for which we are also implementing a special solution...

Train stops are recognizable because of the top coloured part, and the tall scaffold that holds it. Giving the station a colour mask was trivial graphically, but our dear posila needed to add a bit of code to support remnants to have colour masks. Keeping the tall tower is a bigger problem as if the tower is a part of the remnant sprite, the player would be able to just walk over it, and trains would always show on top of it as well. We chose to split the train stop remnant into two layers so the illusion of height is kept.

We also used the colour masks for basically everything the player has the ability to change the primary colours of. It includes the Locomotive, Turrets, Car and the Tank. Once the entity dies, the colour of the given entity stays with the remnant.

We have updated the wall sprites as well, as we wanted to make the walls more like broken walls instead of random rubble, to break their line less. The walls are by far the most destroyed entities besides turrets so they can look repetitive quickly. To improve this, wall remnants have several sprite variations.

Compared to 0.16, whenever any entity gets destroyed, the player can tell which entity it was. We believe this makes rebuilding your factory much more fun, and seeing your things get eaten less frustrating. On top of that, we plan to utilize the remnants to a large degree in the campaign for 1.0 for half-destroyed factories to be found and explored.

We will be adding more remnants and improving some further to make this effect even greater than it is currently in 0.17.

In the past month I had the opportunity to balance test an overhaul mod called Industrial Revolution. Now, after around 1,000 hours of development, Deadlock has finally released the mod to the public today. In the around 65 hours I have spent playing the mod, I fell in love with it and I want to present it to you here. 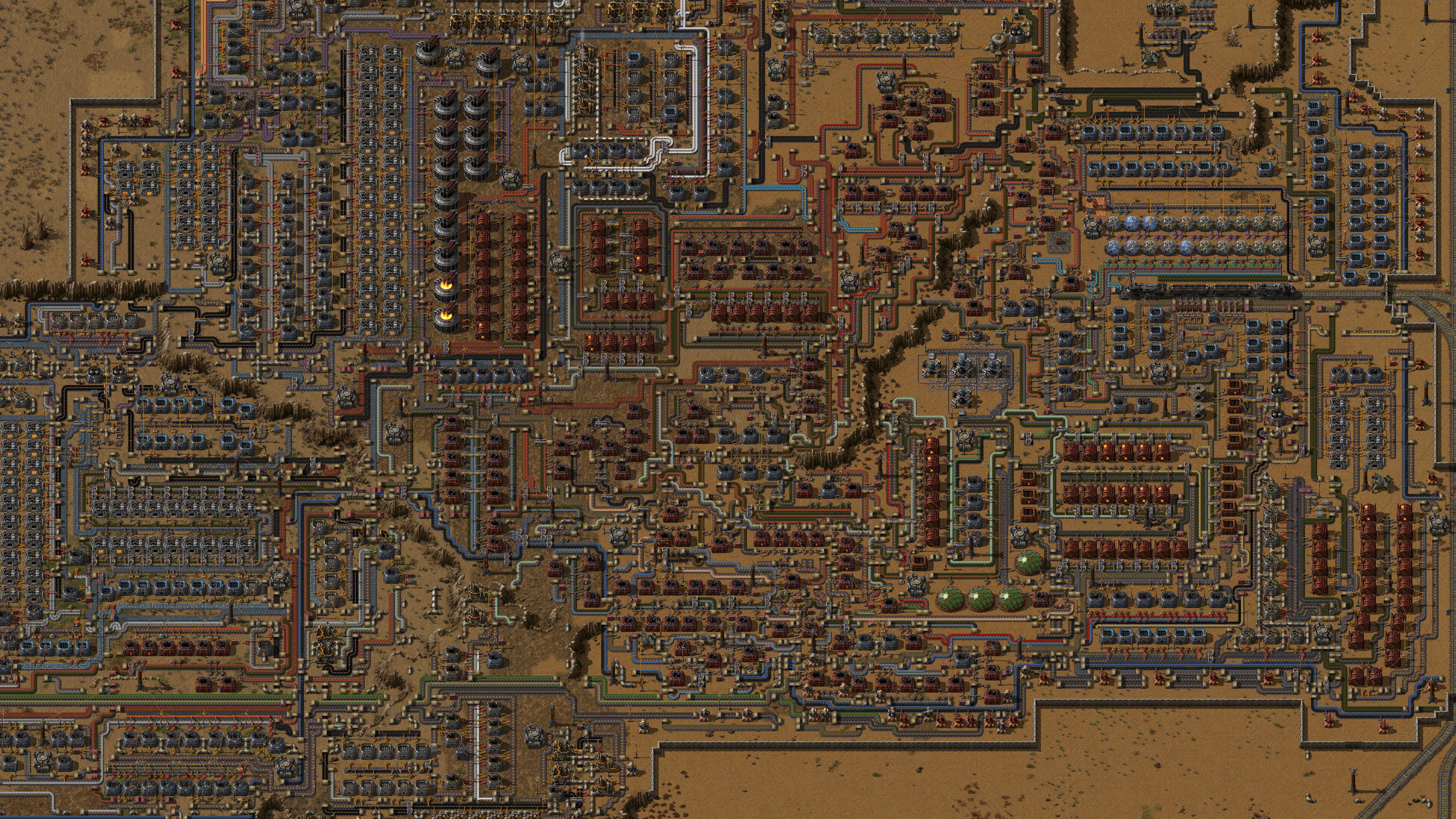 Click to see full resolution My current base, machines from all ages forming one big factory.

The mod gives more depth and length to the vanilla experience by changing the progression throughout the entire game. You work through ages of technology, always chasing the milestone of the next material. Just like in vanilla, you start out with the stone age and classic burner machinery. Automation is key, even in the stone age; the mod adds new intermediate products to all crafting steps. To allow automation at this stage, the mod provides burner assembling machines and labs. 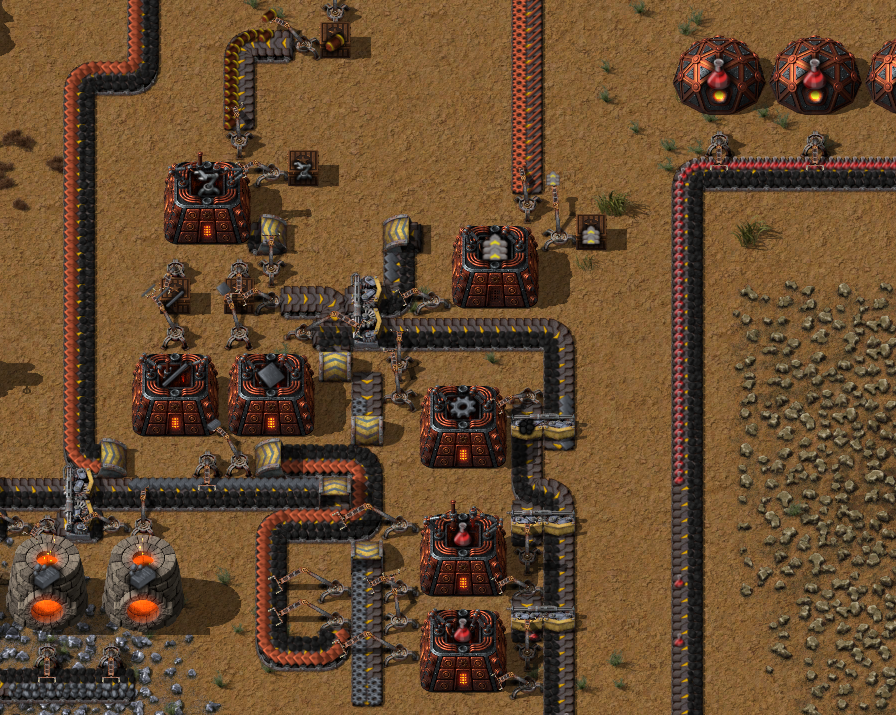 However, instead of getting to power as soon as possible, the next goal is bronze, an alloy made from the two starting resources, tin and copper. After improving the factory with bronze machines and automating logistics science packs, the iron age is not far away. With it come steam power, oil processing and trains, allowing rapid expansion of the factory. The steel age unlocks better ore refining techniques and powerful machinery, paving the way to the rocket. Beyond the ages, the mod introduces new types of turrets, each with their advantages and disadvantages. On top of all these gameplay differences, the mod boasts incredible graphics and good sounds.

When I started testing the mod, I was expecting a long-ish casual playthrough with some different recipes. What I got instead was an addiction and a huge appreciation for the concepts the mod adds and changes: Different challenges, more logistic puzzles and completely new recipes refreshing the whole experience. The extended burner phase in the mod introduced an unconventional problem to me: Fueling burner inserters and assemblers. Combined with my spaghetti approach and limited space due to the enemies lurking in the desert around me, fueling inserters became a challenge that I spent hours on.

My proudest creation is an electric motor assembler, it needs four inputs, all supplied by burner inserters that need to be fueled by other inserters. The assembler stands to this day: 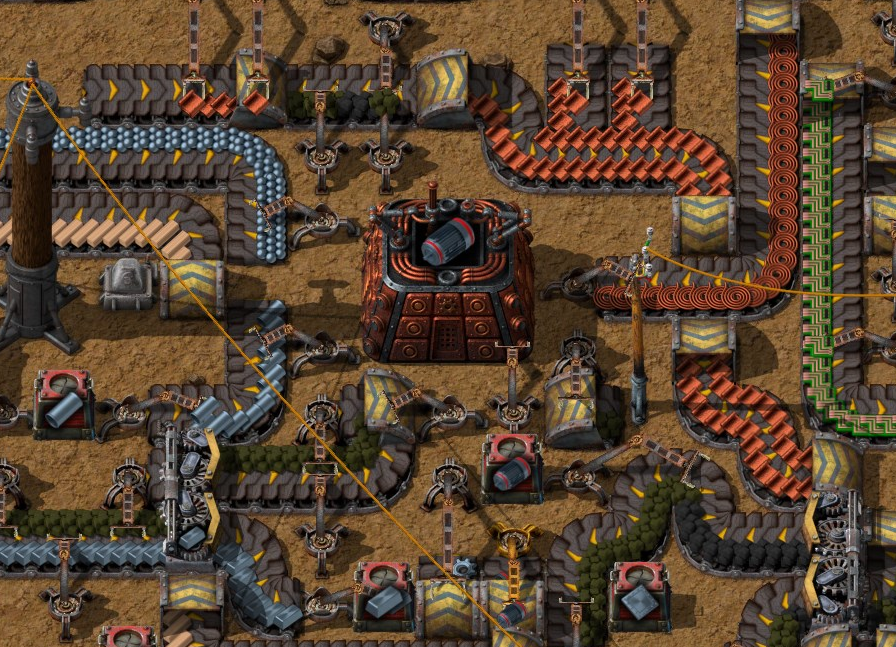 Another great change by the mod is how it deals with ore processing. Ore processing allows the player to improve how many ingots can be produced from ore, up to producing twice as many ingots. This happens in steps, every age introduces a new technology to refine ore. So, getting more iron means building an extra ore processing step and simply connecting it between the last processing step and smelting. Each refining setup has its own challenges such as multiple outputs or needing a catalyst, so it becomes an interesting puzzle to get more ingots. The new ore processing flows well with the rest of the game; often times I found that I needed an ore refining byproduct and more ore refining at the same time. This is a big improvement compared to the vanilla way of getting more plates: Mine yet another ore patch and smelt it in the same old boring way. 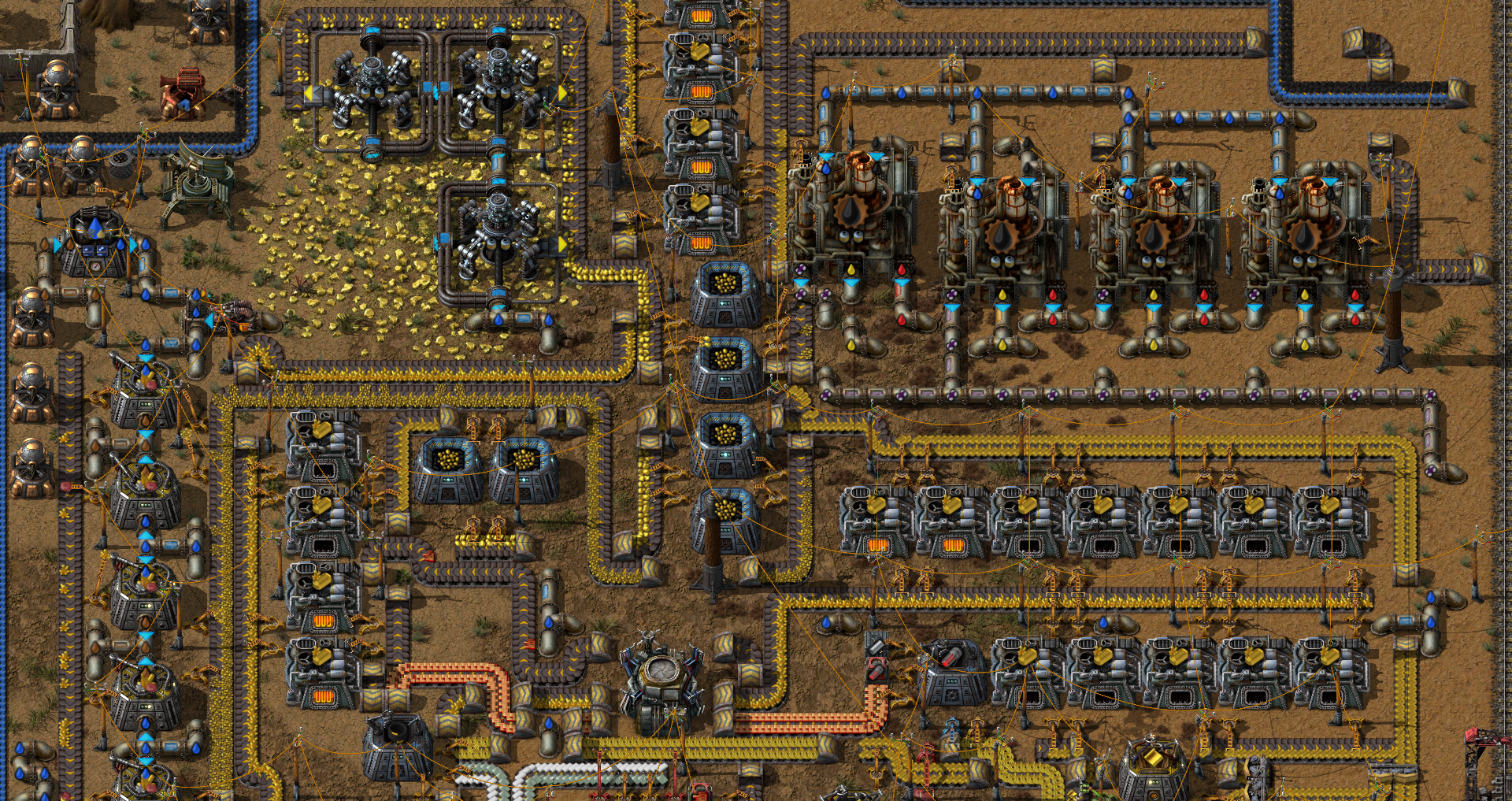 Click to see full resolution Gold being mined, crushed and purified to increase its yield before smelting it, all in the same area.

Of course, adding more intermediates also means that you run the risk of only ever needing a product for one other recipe. The mod manages to avoid this pitfall, I find myself routing belts and pipes through half the factory because an item is needed in multiple different places. Another possible problem is the long burner phase, it could delay automatic construction. This is prevented by the addition of very early personal construction robots. The clockwork punkbots can be used with an automatically refuelling burner generator that fits into heavy armor, all available in the bronze age.

Vanilla’s boring defenses become more varied with the new turret types. The first turret you unlock is a bronze scattergun turret, it works similarly to a shotgun. These turrets are great at taking out groups and still make up a large part of my defenses. However, their range is lower than that of medium spitters, therefore minigun turrets and laser turrets guard my more commonly attacked areas. 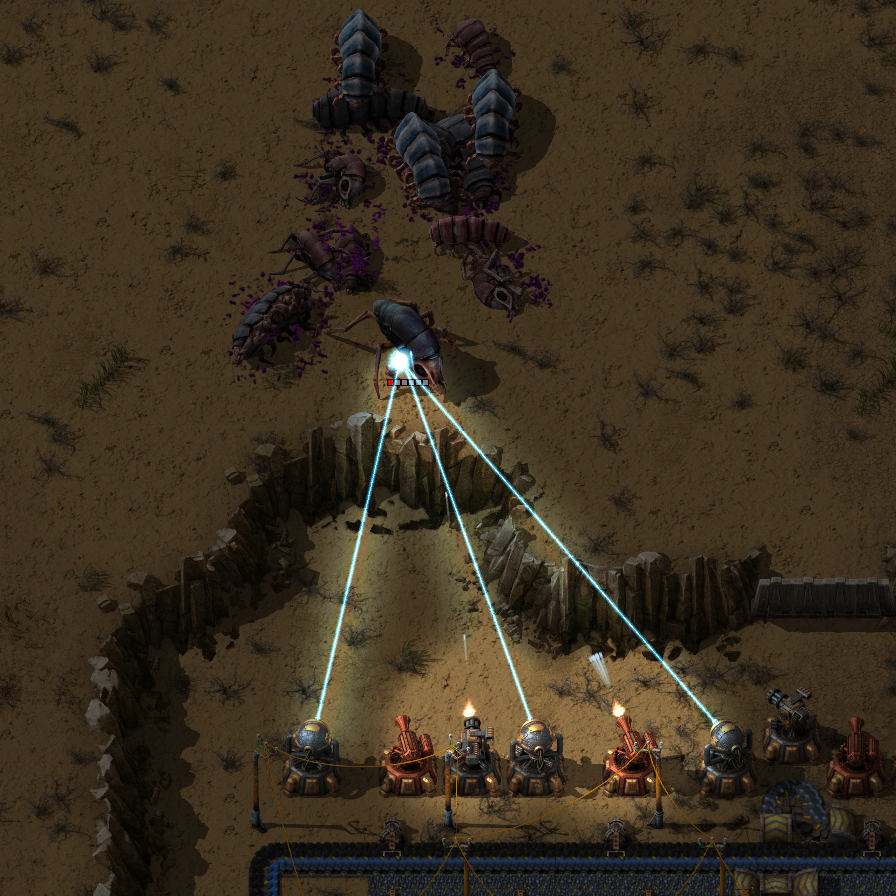 All in all, the mod overhauls vanilla to provide fresh challenges, is well balanced and on top of that nice to look at. I hope you will have as much fun playing the mod as I did, so try it out now that it is released (Mod portal page).