As stated in previous FFF's we will be making some changes to the demo and tutorial content in the game. I wanted to clarify exactly what is being removed and what it is being replaced with, as this content is almost ready for release. If you would like to catch up on the topic, you can read Kovarex's piece in FFF-327, but I will also summarize it here.

The First steps campaign was a series of three levels which used to make up the demo and tutorial in 0.16 and earlier. They were introduced in 2014. We have been working on revamping these levels to bring them up to 0.18 standards.

Very soon the NPE/Introduction will be removed and the First Steps campaign will be reinstated, both as the full game tutorial and the demo.

What has been changed in the levels?

The plan was to change these levels as little as possible while updating them to modern Factorio standards. That is harder than it sounds given these levels were created in 2014.

As stated in FFF-241, there were many things we felt were inconsistent in the First Steps campaign. One of the largest ones was that there were many different and confused channels of information. The newer version has given each channel a purpose and a format.

The most distracting, and the most popular was the character monologues. Some of the messages in each channel were written in the first person, as if the character is talking to themselves. All the instances of this occurring in the Yellow speech bubbles and objective panel are gone or moved to the console. The rule here is that nothing that is actually necessary should come via this channel. To communicate to the player that this is story text, I added a speaker prefix. 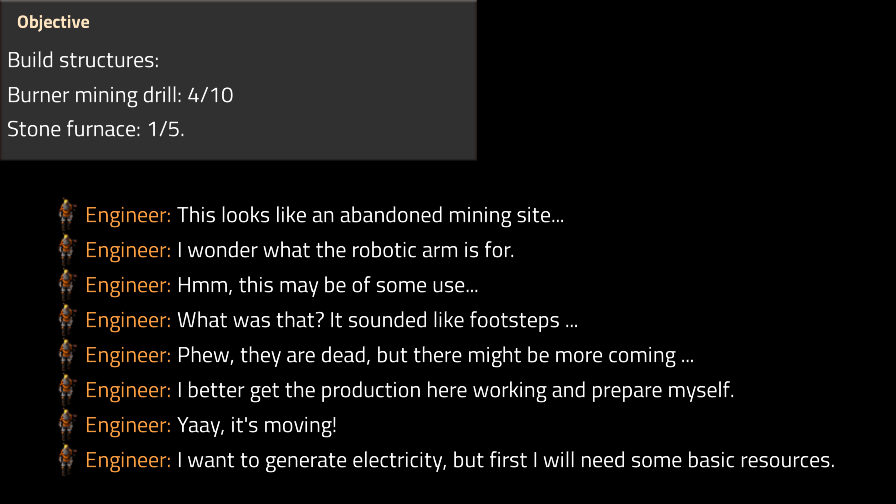 The most necessary and most annoying channel was the Yellow speech bubbles. There are situations where it is absolutely necessary to pause the game and tell the player something. Since we have no other technology designed for this purpose, I just resorted to removing as many of them as possible. They only appear where necessary, although I would still like to get rid of more of them.

The final channel is the Objective window. The rule here is, if the player tabbed through all the speech bubbles without looking, and did not read the story text, they should still be able to finish the level. The text should not be in the first person, and we can speak directly to the player.

Due to much more rigorous and dedicated internal testing (Boskid), we caught a lot of corner cases where players can become stuck. The tutorials also now take into account new and updated game features. For example, previously the pickaxe was used to demonstrate crafting, so some extra attention had to be paid to when the player crafts the stone furnace for the first time.

The maps have been updated to look much more like what the random generator creates in freeplay. The new remnants make a great impression here. 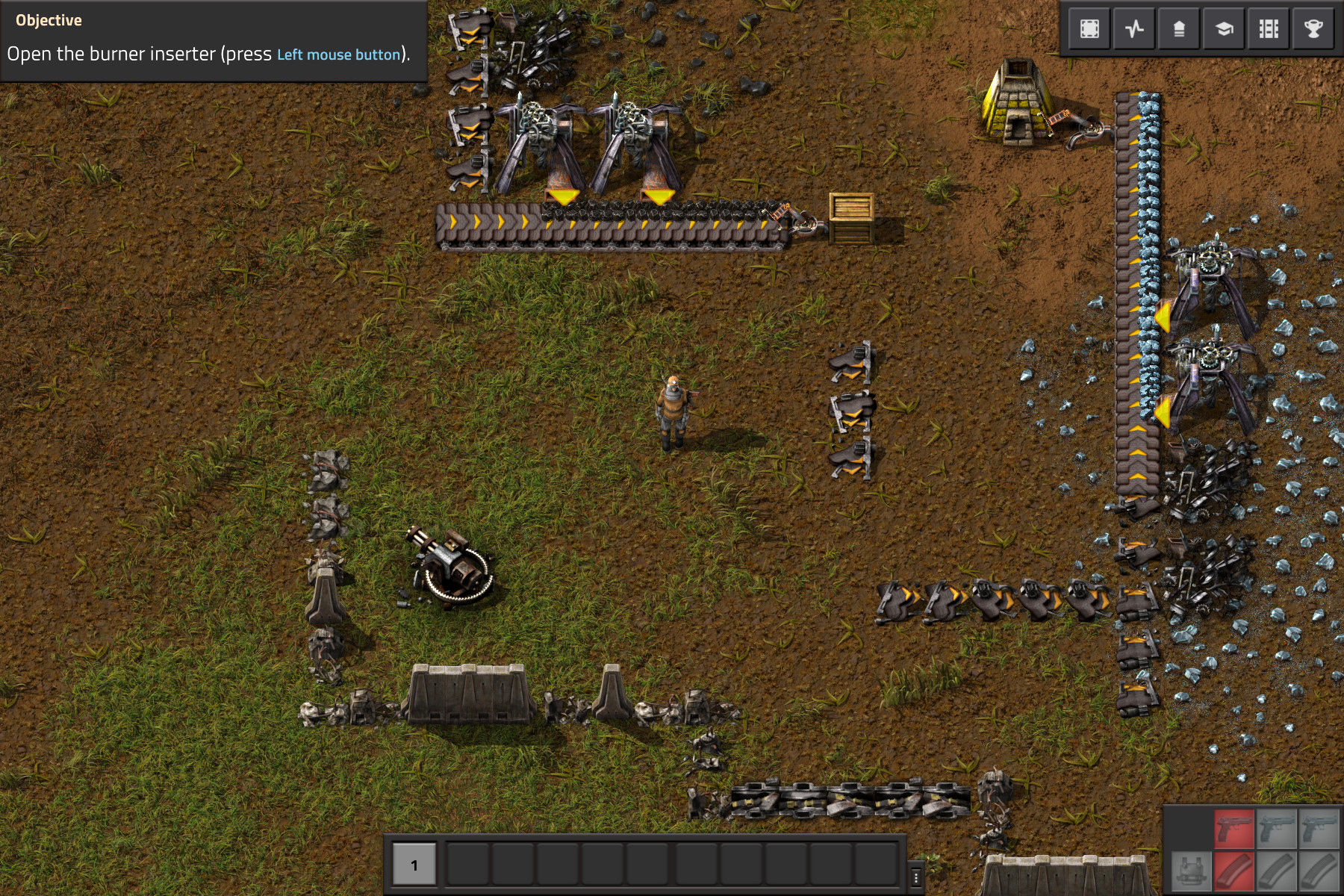 Now that the quickbar does not automatically populate, we had to be more careful about when the player has their inventory open. The new standard for new players is: open inventory, take item, close inventory, place item, open inventory, place remaining items, close inventory. Giving new players the option to add quickbar links as early as possible is a challenge because every time you add a new concept, the player must expend some of their attention keeping it in mind. Not only that, but using the quickbar actually removes a perfect opportunity for the new player to practice interacting with the inventory.

Why are we changing it?

Kovarex discussed his reasoning in FFF-327, but a lot of people asked me for more information to help them understand. Post mortems are uncomfortable but necessary so I will try to summarize his point and add one of my own.

The NPE/Introduction was created to widen the audience of Factorio. It takes new players a long time to get into the game and many stop playing before 'getting it'. The strategy was to show new players (both in the demo and tutorial) more of the mid game. After finishing the scenario Kovarex realised that the experience was not in line with his vision for the game.

When he told me how he felt, I think he was surprised that I agreed with his decision to remove it. Vision alignment is very important, especially in a demonstrator product. It isn't something you can just 'fix' when the project is almost finished.

This is not to say that the NPE/Introduction failed in its goals. It did appeal to a wider audience and player feedback at the end of development was overwhelmingly positive. I received a lot of feedback from genuine first time demo players pledging to buy the game immediately and also from story focused, non-sandbox players who were craving more. But as Kovarex said in his FFF, the cost of this was too high.

In light of the full length campaign being cancelled (see V453000s part in FFF-331), this is the biggest reason why I think the NPE/Introduction would have failed as a demo. We would have been offering an experience in the demo which was targeted to a wide audience, but the quest loving players were not going to get any extra content if they buy the game. A literal "It isn't what it says on the tin" situation.

A full post mortem would be much longer than this, and I would have liked to discuss much more about the things that went right. On the up side, a lot was learned from this project and that can only make the game better in the future.

When is it coming?

The new old First steps tutorial is almost ready for release, we are still doing some general polishing and internal testing, and if all goes to plan, it will be released within the next few weeks. However that doesn't mean the work is necessarily finished, as no doubt we will need to tweak, polish and fix a lot more things as player feedback starts rolling in.

Alongside this addition, we will also be removing the NPE, and doing a general cleanup of the now unneeded data changes. This may affect some mods which have dependencies on some new campaign assets. We might leave some assets in if they are significant enough (for instance the Compilatron), so if you are a modder and something in the NPE is of special interest to you, please let us know.