We have commited to releasing the 0.11.0 on 31st of October 2014. That is next Friday. If all goes well, this will be our Halloween present to the community. But there is a busy week ahead of us:)

Apart from regular pre-release craziness, doing significant refactorings the day before or fixing bugs at the last minute, there will be more. On Wednesday we have scheduled moving to our new office and on Friday morning (yes that is the release day) we will be giving a presentation at a local university about the project. We gave the same presentation about a year ago when it was not exactly clear whether / how long will we be able to continue working on Factorio. That has definitely changed for better, especially considering we are moving out of "our garage" (our apartment used as a working place), looking for people to work with us and doing other sorts of longer term commitments.

The basics of the Multiplayer are done. It is a co-op LAN-tested only, but it works:) Our testing game is at more than 10 hours of gameplay at the moment. We have tried out and tested various concepts in the game (basic mechanisms, fluids, trains, logistic and construction robots, combat) and they work fine. In the past couple of gameplay hours we had hardly any desyncs (and we fixed those that appeared). We have tested the game in 2 or 3 people playing simultaneously (we will try more the next week). Also so far we have tried the game only within our office network. In theory(!) it should work over the regular internet connection as well, but that is something that yet needs to be tested (Cube is looking into that at the moment). In such a case at least one of the clients would need a public IP address for others to connect to him anyway.

Playing the ongoing multiplayer game is actually a fun way of doing the pre-release testing. We test both that the multiplayer is working and also that there are not any super obvious bugs in the game itself. We already found quite a few of those this way. One example would be a bug coming from the internal assembling machine and furnace unification. The assemblers wouldn't accept any item with fuel value (for instance coal) as part of the recipe. Before the bug was fixed we had to run and refuel our assemblers producing the plastics (coal + petroleum gas -> plastics) manually. It felt a bit like playing Minecraft:)

The Spitters are done and in the game. They have already given us hard time in our testing game when their shooting range was too high and they just "spitted-through" our defenses at one point (with a bunch of biters covering their back). Check out the preview below to see them smashing a poorly defended base.

Internally spitters use only one spritesheet and a mask to make different color variants (there will be three). This is a more flexible solution than using pre-rendered spritesheets for every kind of unit (that is what biters use in 0.10.x or lower). In fact, Albert is working on migrating the biters and the worms to the same system (1 spritesheet + 1 mask) at the moment. Together with these changes there will be (maybe not in 0.11.0 but eventually) some VRAM-saving tweaks in the animations themselves (for instance using procedural splashes when enemies are dying). 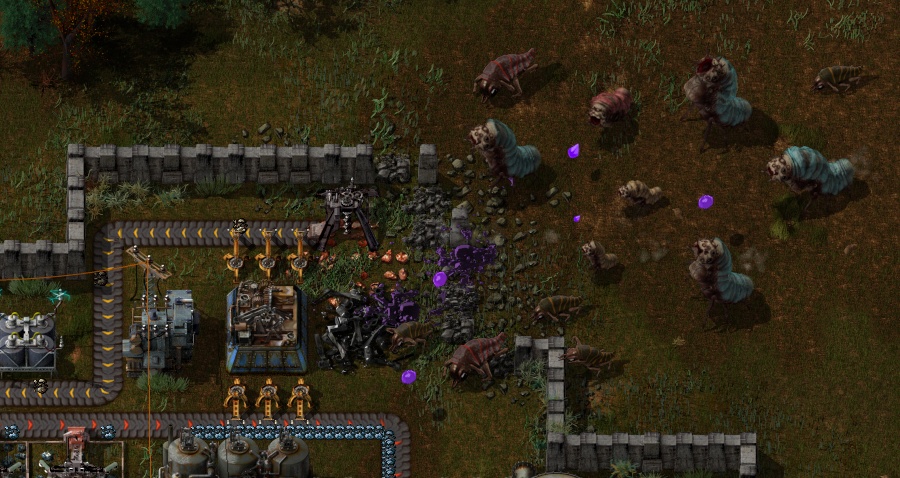 The place for the comments is ready as usual.