this week the Friday Facts are coming a little bit earlier. The reason is that in the evening I will be lost somewhere in the middle of Brno (second biggest city in the Czech Republic). I will participate in a popular annual deciphering game that is taking a place there.

The 0.7.5 with another batch of bugfixes went out this Tuesday. Since then there has been no reports regarding major issues or crashes. Couple of teeny-tiny bugs were reported however that is not enough for us to make a new release now. So the 0.7.5 will become a stable version. Finally:)

I have spent most of the time during the past week working on the trailer. The first version has been done already. There is a discussion thread on our forum (with a link to the unlisted video on youtube) where people can give us feedback about it. This is by far not finished. But we needed to get it out in order to start talking to the music & sound guy and give him some baseline to work with. Yesterday we had a long chat with Albert about the trailer and we agreed that the first scene (standing in the middle of the ruins) should be changed. Now it feels too out of the context from the rest. Apart from that we are quite happy with the general flow. Of course there are plenty of details that need to be tweaked so there is still a long way to go. On the other hand having all the trailer in the script makes things a hell lot easier for us. Changing things like the zoom behavior, camera movement or speed is just a breeze. Same goes for extending / shortening the scenes or adding a new scene all together. Another issue is the final video quality. There is a lot of movement going on in the trailer and currently after youtube compression, often the video is just blurry. We have used the 720p for now but that proved not to be enough. Oh and regarding the music. Just for fun we tried to run the Raymond Scott's Twilight in Turkey together with the trailer. It turned out to work surprisingly well, so one option is that the music would go in this kind of direction.

Apart from preparing the 0.7.5 Michal spent most of the time on the new scenarios for the main campaign. It starts to slowly shape. At the moment there are 5 levels that introduce basic things like assembling machines, research, trains, etc. to the player in the course of playing. Often the player is not starting from the scratch but he can use already existing pieces of the factory. Writing the scenarios (and the trailer) is also a good opportunity for us to review, document and extend the Lua API.

Kuba and Albert keep working together on the terrain. There are couple of variations of the dirt by now and Albert is now spending his evenings with the grassy terrain. Kuba made couple of Blender scripts to ease the manual terrain work. This way Albert can take advantage of generated tileable noise or terrain transitions. Also yesterday Kuba showed me a great picture he generated that I can't resist to share with you. In case that you always thought that there is a lot of recipes in the game and that the whole thing is too complex, then worry no more. Here is an ultimate Factorio recipe cheatsheet for you: 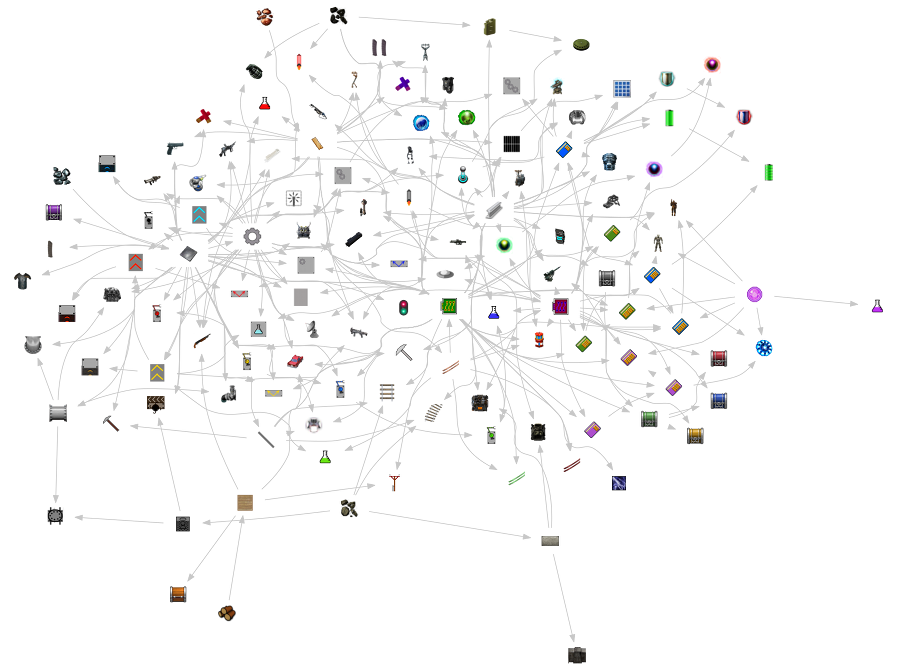 As usual there is a post on our forum where you can discuss this update.