the summer has hit Prague with full power. The temperatures are above 30 Celsius in the shade. Fortunately, our office is in the old stone building, so the climate here is quite comfortable even without the air-conditioning.

So the original 0.12.0 projected release day is today. And unfortunately it won't happen. We are almost there but not quite, so we decided to postpone the 0.12.0 release to the next week, which at the moment seems actually very realistic (nothing is 100% though - for instance if an asteroid hits the office we probably won't release). All of the planned major features are done. Most of the team has participated in the bugfixing efforts this week led by kovarex. Many issues both from the forums and our internal task board have been closed. However we got to playtesting only yesterday and there are still issues especially in the multiplayer determinism. Surprise, surprise =)) Well, considering the how big the update will be it would be a bit of a miracle if things "just worked" (even with tests passing and separate functionalities tested separately during the development).

We have had another addition to the team recently. This time it was not related to the development of the game directly but rather to many things that go along with making and selling a game for the living. The position is officially called "office manager" and it includes a variety of tasks. Namely:

This time it is a little bit special because the person we have hired for this is a girl. Her name is Betka and she has been with us for about a month. So far she is doing well even though working with 9 geeky guys in the office is probably not easy=) One of the main longer-term things she is working at the moment is preparing the game for Steam greenlight and launching on Steam. This I mean from the marketing and presentation perspective - we still take care of the actual programming=)

Many aggressive optimisations have been done for the 0.12 release. This has been described in the detail in the past by kovarex. We also did some "half-blind" tweaks in bitmap rendering in our clone of the Allegro library. Half-blind meaning that we couldn't 100% predict what the consequences could be. A few days ago Michal discovered that there is a downside. We use a mechanism for saving V-RAM when not frequently used sprites (trains, biters, player) are saved only in RAM and rendered directly from there. That is at least what we thought was the case. But there seem to be 2 problems:

This is what you might see as a Factorio developer (and unfortunately sometimes as a gamer too). 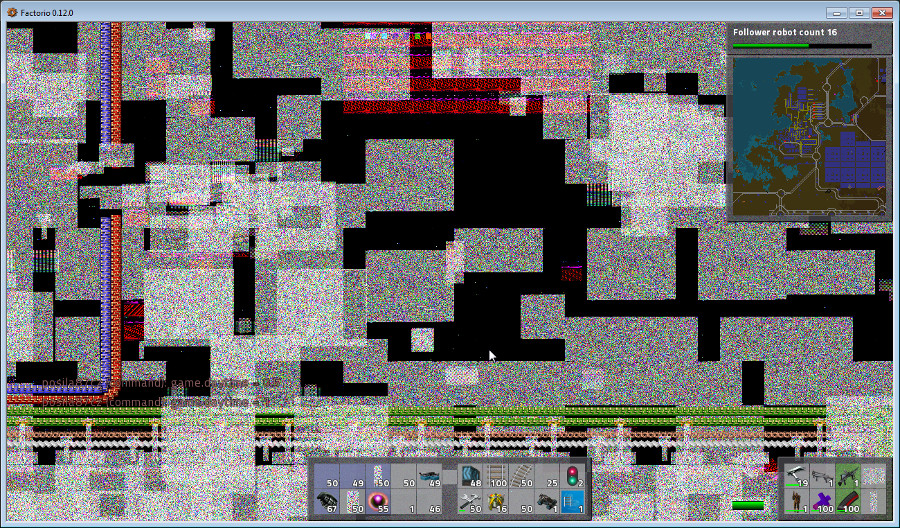 Let us know if you are looking forward to 0.12.0 same as we do at our forums. Now I go back to playtesting=)).

Oh and by the way, this might be the biggest factory ever built in the game. The author mentioned on reddit that he got like 2 FPS, kovarex tested this in the 0.12 and the result was like 12 FPS if I am not mistaken. Still long way to 60 FPS though =))