If you don't want to read the changelog, you can either take look at our update summary page or check out the video that summarizes it as well: We released version 0.12.0 on 17. 07. 2015 so it took us almost a year. We made a lot of changes in that time.The commit count increased from 15967 to 22980, which is more than 40% increase. This means, that we also created a lot of new bugs. We are working as hard as we can to fix the bugs and we'll have 0.13.3 today, which means we've made 4 releases in 5 days just to make sure we'll fix as many bugs for the weekend as we can.

This is an early experimental release, so there are a lot of issues we are aware of, and we will do what we can in the future weeks to solve them, if you want to avoid bugs, wait for few weeks until the 0.13 is semi-stable, the stable stable version might take a long time, so we can't really give any estimate.

There have been many complains regarding the terrain generation, we didn't encounter these problems in our games, but we should probably go back to it and tweak it a little.

We are also aware, that the mod portal (both the site and the in-game access) is very simplistic, we just wanted to have it, so the new 0.13 mods are there, so we could move them away from the forum eventually. We will improve the portal continuously (more in the fff 141).

Now, when we can connect to public games on the internet, we found out, there are lot of issues with the multiplayer server that weren't apparent when we were lan-testing it. One of the issues is, that even when we use the one center player (the server) to resend the packages of individual players, the server still sends one packet per player to everyone. This means, that with 10 players, the server sends 10 packets to every player every tick, which results in 6000 packets per second to be processed by every player. The obvious solution will be, that the server will merge the messages from individual players into one package. We also plan to reduce the network transfer by sending only 30 updates per second (once per two ticks) over the multiplayer. This will reduce the network problems related to packet throughput a lot. Apart from this, we found out, there are few bugs in the internal multiplayer state logic. We will look at these problems once the main bug report wave is tamed, so consider the current multiplayer very experimental.

As 0.13 is freshly out and we were already asked about 0.14 plans. We have a lot of things we would like to do in 0.14 but nothing is official yet. In about a month from now, we will sit down and make a specific plan for 0.14, so don't ask us about it until we declare it please :)

The good deals that are not so good.

One of the problems we had in the past months were the credit card frauds, so let me explain how exactly it works. Although it is a giant inconvenience for all parties involved, it is not currently a large financial burden for us, I don't want to guilt trip anyone, just to get the message out. The conclusion is, that we strongly advice to buy Factorio, or any other game just from reliable sources. In our case, it is factorio.com, steam, gog, and humble store currently. Pirating the game hurts us less than using these sites.

I have to share the fantastic video with rube goldberg machine done in Factorio. We would also like to thank the brunzenstein. He sent us the most luxurious cake I have ever seen, which gave us some extra energy to dig deep into the bugfixing: 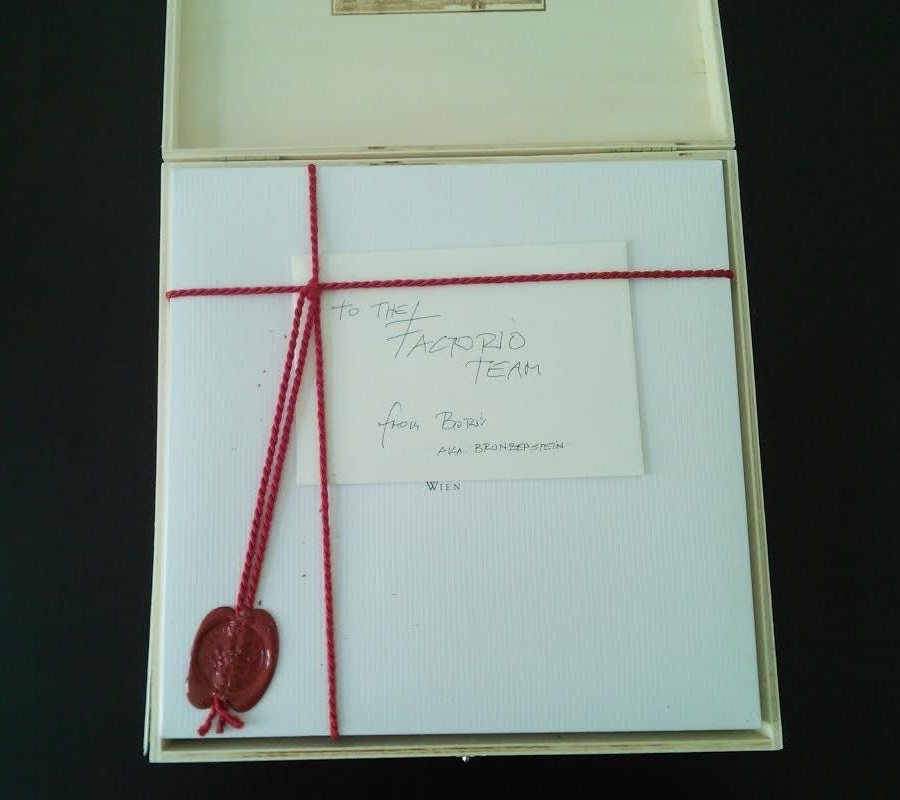 As always, let us know what you think on our forums