The Entity info is the information about the currently selected entity that appears on the right side of the screen:

We had 2 problems with its current state:

So we experimented with entity info as a tooltip next to the cursor when hovering the entity: 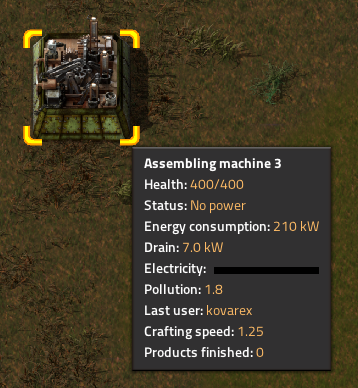 So we tested 3 different ways to activate it:

We assigned each of the options to be tested by someone, with the hope to figure out which (if any) of them is better than the current one. Vaclav tested option 1, Twinsen tested option 2 and I tested option 3.

Unfortunately the result was that in the end everyone preferred his option the most, and we had no conclusion at all. Then we realized that the flaw of the test was that each of us picked the kind of option we already knew we would probably like.

After some discussions, we decided on the following:

Two years ago, I was under the impression, that we need to eradicate all the weird options, to make the game just work for everyone. Over time and after all experience and feedback we have gathered, I started to realize that different people have different expectations, and their brains are wired differently. Some option might be useless for 99% or players, but for the 1% of players, it might be the most annoying thing to be able to customize it.

The initial task, "Add support for robots to blow up cliffs", was easy. 1 cliff gets marked for deconstruction and 1 robot is sent to blow it up. The tricky part comes when you want to account for the fact that 1 cliff explosive can blow up more than a single cliff. When a robot is sent to blow up a cliff, the system has to do a little extra work:

This extra work isn't for free, however the game isn't likely to have a large number of robots actively bringing explosives to blow up a cliff, since as soon as a robot is dispatched it quickly finishes the job and the cliff is permanently gone. Using this system the game can track if a given cliff is going to be blown up, even if it isn't yet marked for deconstruction. This way you don't get weird overlaps in robots flying out to cliffs that will be blown up shortly by another robot.

After making this system it has made me think if I could apply some variant of it to robots building things, so a robot could theoretically grab 3 inserters and build all 3 quickly in series. It's an interesting thought for another time...

As we mentioned in FFF-237, we are going to be adding some fancy text effects to the game in 0.17. In that blog post we mentioned the possibility of having some interactive text elements, such as clickable icons in chat messages, blueprints, etc.

Well, we have an update on that, as we have now implemented several of these features. These tags are created in a somewhat general way, if you have the console/chat open and shift-click something, it will insert a chat tag.

Map pings Shift-Clicking the map with the console open will create a map ping. Clicking a Map ping will open the map at the specified position.

Armor tags Hovering an armor tag will show you the armor and equipment layout for that specific armor.

As you can see above, each special tag has some [description] text associated with it, which lets you know you can interact with it. It will still be possible to insert plain icons that won't have any interactions.

For now, 'interactable' tags will only work in chat, but they might end up being allowed in mod GUIs too.