We have a record low in our bug report forum, of only 55 active bug reports. I don't think in the history of Factorio the bug forum has been so clean. No doubt once we mark 0.17 as stable the count will shoot up again.

For this weeks graph I added the count of players on Steam as the left axis. We thought it would be somewhat interesting to see if there is any correlation between the two. 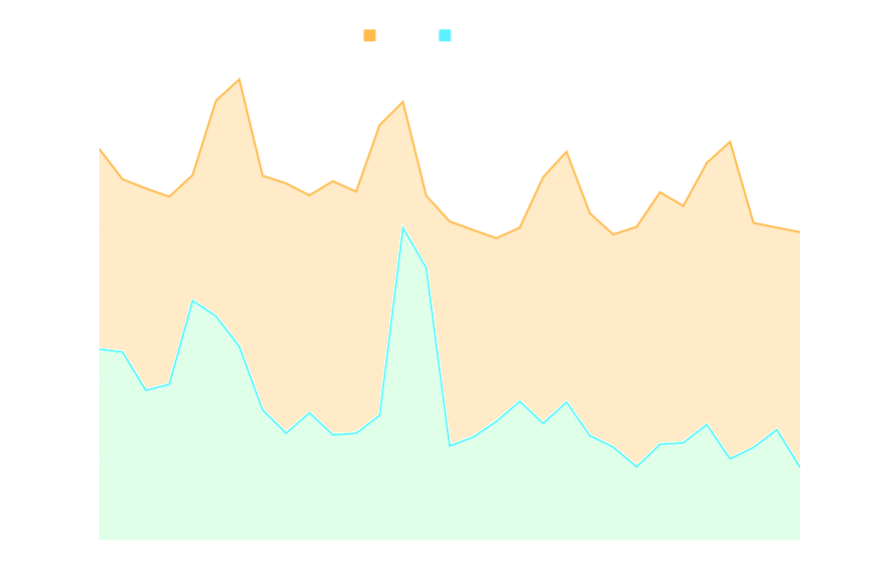 Note: The axis have different scales.

I also prepared the same graph but for the duration of the 0.17 release. You can see our player numbers are dropping quite a lot, from the all time peak of 22,457 on the 3rd of March 2019. 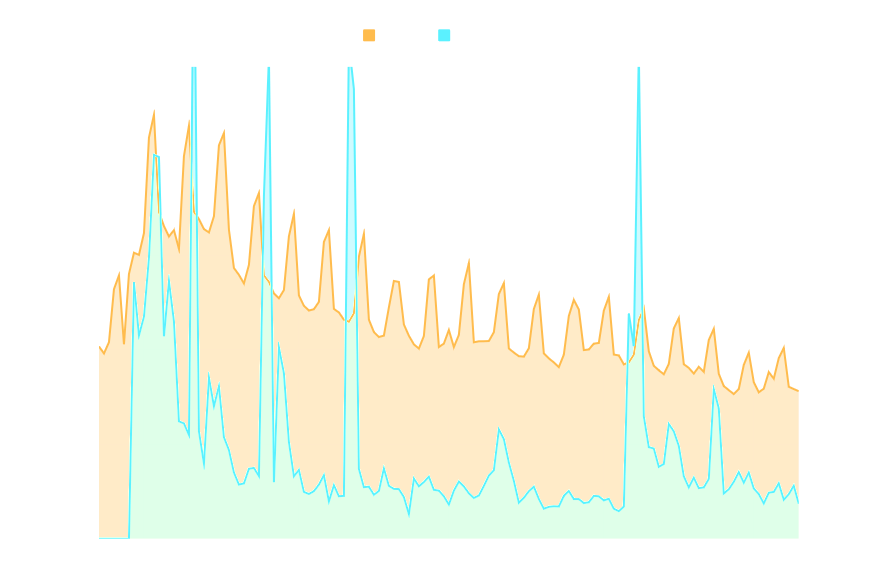 While bug reports might be at an all time low, we are not going to call the game stable yet. We still have an important milestone to reach, that is, implementing the new Introduction campaign graphics (FFF-301). A lot of the team has been on vacation these last few weeks, including the whole campaign team and most of the art department. What this means is that we expect it will be a few more weeks before we can call the current version stable.

We have been asked a few times when stable will be released, but my question is, why does it matter exactly which version we call stable? Are you waiting for stable to play a new playthrough? The thing is, this stable is only going to be the 'first' stable. Our plan is to have a number of short experimental phases after the first stable, where we will add new GUI's and such, which will add bugs and technical debt. After fixing the bugs in a 'small' experimental content release, we will then mark that as the 'new' 0.17 stable.

Besides, there are still a few edge cases with signals that kovarex is busy fixing: 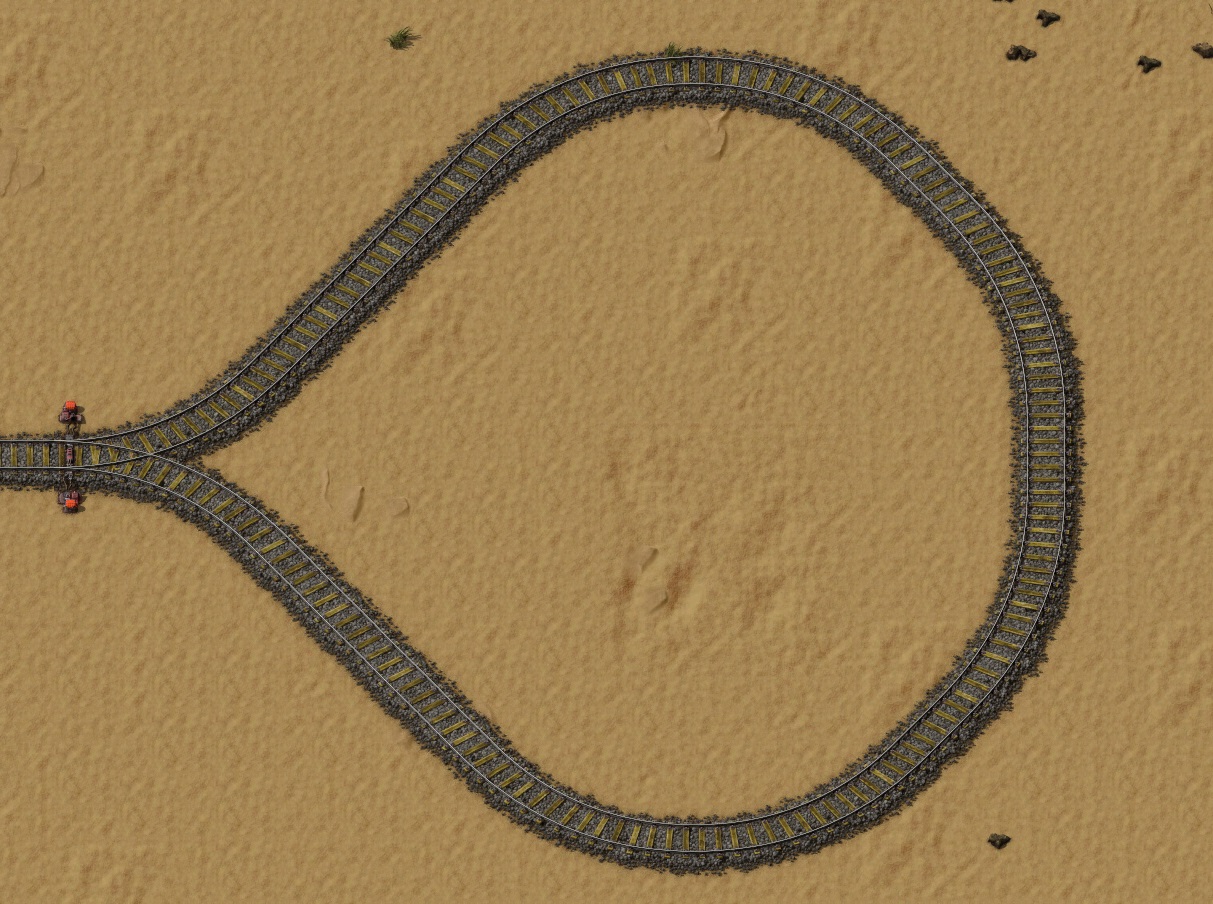 For instance the setup above took him 3 hours to fix. The cause of the issue was that the segment has both an incoming and outgoing signal at the same position.

There was recently some news about G2A, prompted by a tweet by Mike Rose of No More Robots. In a follow up tweet he said: Please, if you’re going to buy a game from G2A, just pirate it instead! Genuinely!.

We have talked about the grey market resellers in some previous Friday Facts (FFF-145 and FFF-171), and our stance is pretty much the same as Mike, we would rather you pirate Factorio.

Upon hearing the news of G2A advertising Descenders, we took a look ourselves, and we discovered they were doing the same with Factorio: 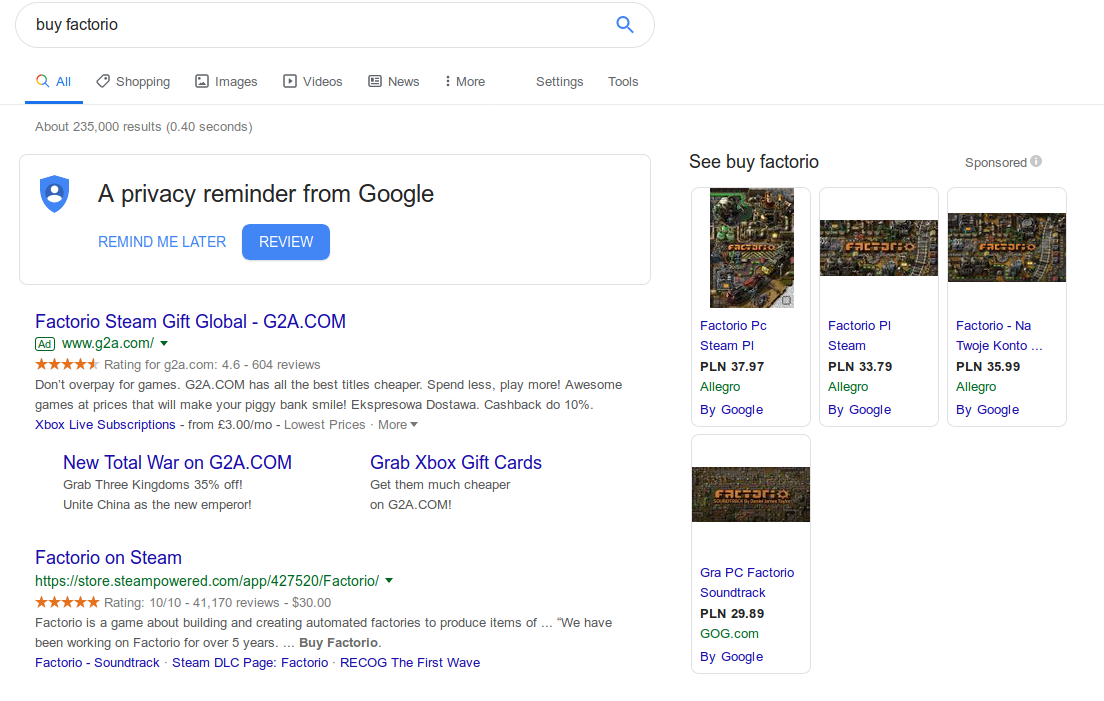 Obviously we aren't super happy about it, but after looking into some trademark/copyright law, it seems there is not much we can do.

After the news broke, G2A posted an article on their website: G2A vows to pay devs 10x the money proven to be lost on chargebacks. After reading it through, I thought I would take them up on their offer.

We had a ton of chargeback and fraud issues in 2016 just after our Steam launch, with over 300 Steam keys of the game being purchased with stolen credit cards. With an average chargeback fee of about $20, we estimate the total amount of fees we paid because of chargebacks is about $6,600. We will be doing a deeper evaluation of our historic accounting records to get a more exact figure, but it doesn't matter so much now.

So I emailed G2A about the article and their 'vow' last week, and they are not exactly prompt in terms of dealing with the request. I have a list of all the Steam keys I had to revoke because they were purchased fraudulently, and G2A offered to check the keys. Currently this is where the story ends, they haven't replied to my last email (2 days ago) sending them the keys and asking how many of them were sold on the website.

Funnily, we already know that at least some of the keys were sold on G2A, because after I revoked them, I had people emailing to ask what was wrong with their key:

Well anyway, after we switched payment providers to Humble Widget, the fraudulent purchases stopped. We don't really care about G2A anymore (but we are in a unique position due to our no sales policy).

There are still Steam gifts of Factorio being sold on G2A, these are most likely 'legit', in that they were not purchased using stolen credit cards. The question is, where do these gifts come from? Obviously people would not be selling Factorio Steam gifts if it did not generate a profit. We have some ideas:

To conclude this whole topic, we strongly recommend people buy from us or one of our official partners. Not only for the reasons you might think. If you buy from a grey-market site and have a problem with the game, or something goes wrong, you will have to deal with their support system. I don't have the exact details of how to request a refund or customer support from G2A, or how long they will take to respond to your issue.

If you buy from us directly, we offer a 28-day refund policy. If you have a problem with the game, you decide it's not your cup of tea, you thought the biters were too cute, just send us an email and you will have a refund in short order. We also deal only with Factorio related support problems, we don't process orders of thousands of different games, so you can be sure your case will be handled expediently by team members who know the game in and out.