Hello,
It is exactly a year since we moved to the new office. I had also the Factorio presentation in the university for the third time already (third year), and I realized it is the third time I said there that Factorio will be finished in a year. I want to believe it to be true this time so we will try to really make it happen.

We have been discussing this topic for some time already, and we decided that the plan of the space platform would be too much if we really want to keep aiming for having 1.0 finished in a year. I believe that some people will not like it, but we have a lot of other things to be done on the ground before aiming for the stars.

Let me just show you some tasks from our trello todo list for 0.13: And these are just the bigger ones. There are is so many of them, that we can't promise to finish all of them, so adding space platform wouldn't really make it better, especially when these feel like "must haves" while the platform is rather a "nice to have". At this speed of releases, my estimate is that 1.0 would come after 0.14, so there aren't so many releases left to do the all other things we were postponing for a long time.
This doesn't necessarily mean we will throw the idea away. One of the possibilities is that the space platform content could be part of an expansion (but no promises here), so we could make it really shine and use the possibilities of the idea fully instead of making hasted prototype squeezed into the regular schedule. Other advantage of this plan is, that even if we would never make the expansion for whatever reason, we would still have a finished and polished game which I prefer to unfinished one although it would be bigger.

One of the never ending problems with modding is, that it is very hard to keep the lua api documentation up to date. Ondra is working on a tool that can generate the lua documentation directly from our source files. This is the preview of the work in progress: 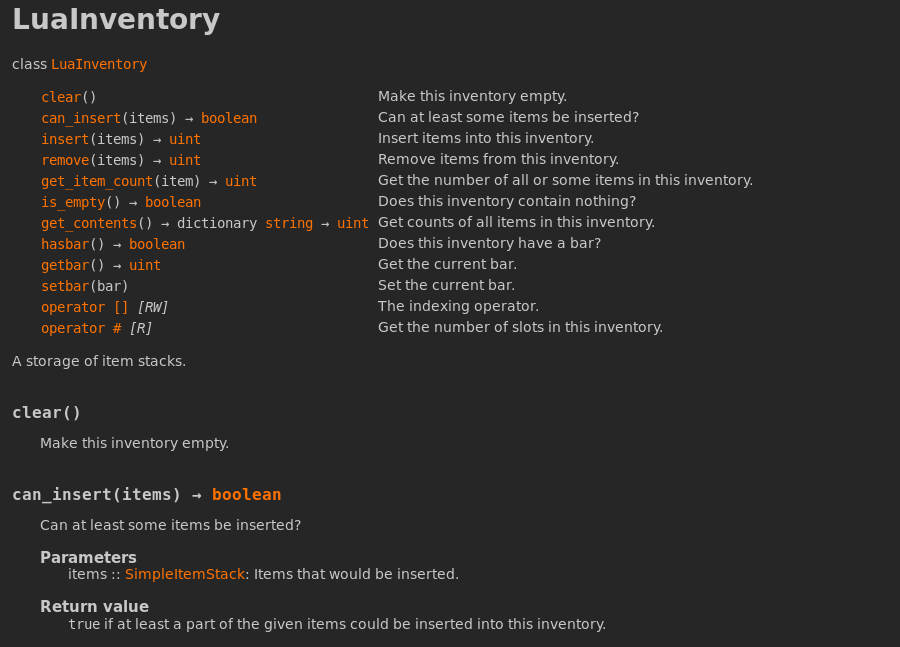 We also try to enhance the possibilities of mods, so day time and wind are separated per surface in 0.13, new custom element (radio button) is implemented and the support for changing recipes/technologies runtime is also planned. This could used to have a technology that can make existing recipe cheaper for example and I guess that it could be used also in the vanilla.

Vaclav is now focused on flame and effects, this is the preview of new flame effects for furnaces.

The plan is to make more fire effects for 0.13, because I'm dreaming of forests on fire for a long time. And if we have forest on fire, why not biters on fire? Do you see how easily can the 0.13 list grow? :)

P.S. Our new team page is ready. It is a nice reference when translating the names to the forum nicknames.